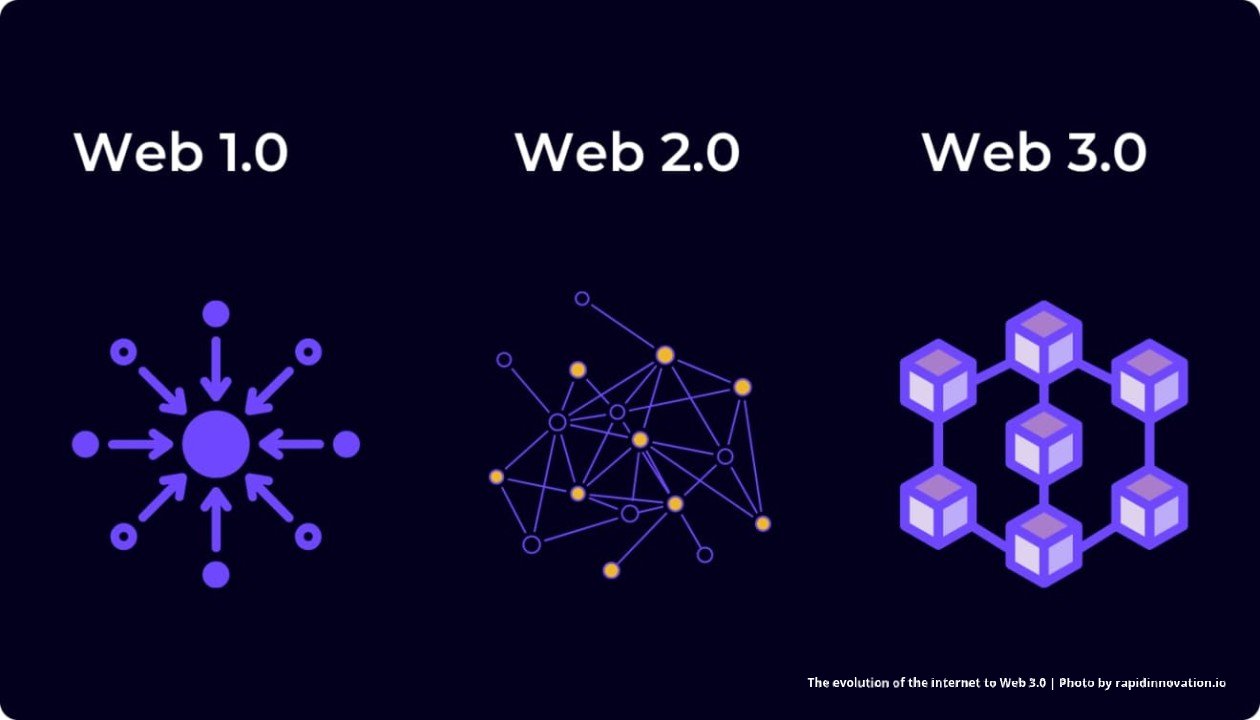 If you’ve heard of blockchain, NFTs or crypto, you’ve probably heard of Web 3.0. It's predicted that Web 3.0 will change finance, entertainment and more.

Critics of blockchain, crypto, and Web 3.0 call these technologies a bubble waiting to pop as well as “marketing buzzword(s)”. So what is Web 3.0? Is it the tulip bubble of the 21st century or technology that’ll positively disrupt the world as we know it? In this article, we explore what Web 3.0 is, how it compares to previous versions of the internet and what it has to offer.

Supporters of Web 3.0 have said that it’s the next generational step, where internet applications, websites and companies incorporate decentralized technology. Sir Tim Berners-Lee began development on the world wide web in 1989 where he intended the internet to be:

‘a collaborative medium, a place where we [could] all meet and read and write.’

Web 1.0 was the earliest form of the internet where the content was curated for users but limited in capabilities. This static web, also known as a ‘read-only’ web, roughly lasted from its inception to around 2005.

Web 1.0 was the information economy which can clearly be seen when looking at the companies, services and top websites of that day. Think of Yelp, AOL, Yahoo! and MSN. Web 1.0 provided what you wanted if you knew where to look because it didn’t have algorithms to search effectively for desired content.

This is the web of today that we’re all familiar with. This social web, or the ‘read-write’ web, provided dynamic content, interactivity, and personalization. We obtain different content when we visit sites like YouTube, Facebook (Meta), or Twitter. There is no date where Web 2.0 transitioned from Web 1.0, but it changed gradually until it looked vastly different. Cloud computing, eCommerce, social media, and many things we use today were only possible because of Web 2.0.

Tim O’Riley, Co-Founder of the O’Riley Media, popularized the term Web 2.0 when he said:

“the business revolution in the computer industry caused by the move to the Internet as platform, and an attempt to understand the rules for success on that new platform. Chief among those rules is this: Build applications that harness network effects to get better the more people use them.”

Web 2.0 can be simplified as the ‘platform economy’, where sites like Facebook, Twitter, and Amazon dominate this space because they rely on the network effect and vast amounts of user data. They’re able to aggregate their user's data, including users' interactions on their sites, to advertise and predict behaviour. Users are the product.

Web 2.0 provided a fundamental shift to how we interact with each other. It also bought awareness of the lack of privacy and security that these centralized companies provide. These companies have exclusive authority to verify user identities, authenticate actions and regulate access. These Web 2.0 companies have been likened to a “benevolent dictatorship”.

So when is Web 3.0 coming? Even Elon Musk is mockingly wondering?

It’s somewhere between a and z

Well, the transition from Web 1.0 to Web 2.0 happened gradually, and so shall the transition to Web 3.0. Technically, elements of Web 3.0 are accessible today such as Decentralized Autonomous Organization (DAO), decentralized applications (Dapps), and decentralized finance (DeFi). These systems are more than just coding or finance, it is a new philosophy for how the web should be managed and interacted with. Chris Dixion, internet entrepreneur and investor, said:

“Web3 is the internet owned by the builders and users, orchestrated with tokens.”

This web gives rise to the token economy, where the internet becomes ‘read-write-own’. Web 3.0, or the decentralized web, incorporates both Dapps and DeFi (like crypto-currencies, NFTs or tokens) which rely on two technologies: decentralized networks and blockchain.

A decentralized network is one where the code that powers applications is distributed to many computers/servers, which are also present within the network. This means that everyone that uses the service has the same code that powers the service. By participating, users provide some of their computing power to uphold the decentralized network and in some cases, they can be rewarded for doing so.

Blockchain is a new technology, first introduced with the creation of Bitcoin. This blockchain technology is like a database and has been referred to as a distributed ledger. This ledger is owned by everyone, and each new entry is linked with some complicated mathematics to the previous entry.

This chain does not rely on a central authority like banks currently do with our transactions. Rather it is a publicly accessible ledger that relies on the network to verify a specific block in the chain. Everyone who has the distributed ledger can check if that block exists in their ledger. If you’d like to learn more, Anders Brown has created this online tool to show how blockchain works.

Web 3.0 is trust-less and self-governing. Web 3.0 is not the “dark web”. Currently, Web 3.0 has some shortcomings, namely, it is not a familiar or easy concept for newcomers to this space. There is no intuitive analogy to explain Web 3.0 as there was for the previous two iterations.

The aforementioned shortcoming is minuscule when compared to the excessive energy usage of energy and computational resources. According to the Cambridge Center for Alternative Finance (CCAF), Bitcoin has used roughly 11 Terawatts hours [TWh] in January 2022 alone. Its annual energy usage (of about 110 TWh pa) is roughly equivalent to small countries like Sweden or Malaysia. Most blockchains use proof of work for verification, but these are energy-intensive. Other coins incorporate proof of stake which uses less energy, but this energy problem is still being worked on.

The final issue of Web 3.0 is that there is no central authority to regulate who can create tokens, DAO or Dapps – ironic isn't it? In most cases, fraud happens because of spoofing attacks. Users are scammed into handing over their crypto wallets which verify ownership of specific tokens. Currently, Web 3.0 is the Wild West and one should be cautious.

“previously unimaginable opportunity to grow the connection between creators and their fans”.

This internet promises to give back our data, our privacy and our ownership while still being as collaborative as Web 2.0, if not more so. Originally, cryptocurrencies like Bitcoin had speculative value, but that was the start of innovation. Now, one can invest in digital assets or automatically execute code with smart contracts while remaining transparent, verifiable and robust.

Artists like Beeple, who sold an NFT of his art for a very nice $69 million, could include a smart contract within that NFT. This smart contract will automatically execute if the art is resold so that the artist may get a small portion of that sale.

This provides artists and creators with an opportunity to curate content to their true fans while not relying on centralized organizations to provide revenue after their content is sold. This technology can be seen currently on Mirror, the Web 3.0 version of a publishing platform such as Medium. This platform provides the opportunity to sell your work to true fans as well as crowdfund by creating NFTs (see our article on NFTs). This platform provides content creators with the ability to capture more value from their fans than from current Web 2.0 sites.

Web 3.0 advocates believe that buying/selling is the tip of the iceberg, where the real value is how it’ll help people organize themselves and create communities. DAOs facilitate groups to be created so people can work easily together, whether it’s a company or a short-term project. One could efficiently distribute equity in a project to investors, partners, and people who are actually working on it — traditionally done with many lawyers, paperwork and time.

Company operations are being redefined by DAOs, which make it easier for ownership and decision-making powers to be divided among their users. Gitcoin is an alternative example of a DAO that provides developers with a cryptocurrency for working on open source issues while Radical is a decentralized alternative to GitHub where token owners can vote on the direction of the project. Today, there are more than 100 DAOs managing over $10B in assets.

We’ve honestly just touched the tip of the iceberg while covering some of the basics of Web 3.0.  Web 3.0 promises to bring a fairer internet through decentralized networks that provide users with true ownership of their data. There is so much more to discuss: AI within Web 3.0, the metaverse’s connection with Web 3.0, new applications emerging from smart contracts and much more. Web 3.0 still has time to evolve and mature into a technology commonly used by all and move further away from being an elusive buzzword.

If you’d like to learn more about Web 3.0, there are some useful blog posts around identity in Web 3.0, crypto for Devs, micro-economics and the value chain of the open Metaverse.

If you’ve heard of blockchain, non-fungible tokens (NFTs) or crypto, you’ve probably also heard of another term – Web 3.0. Crypto-heads, those who advocate for blockchain technology, create and use these terms extensively. They predict Web 3.0 will revolutionise finance, e-commerce, entertainment, and many more industries.